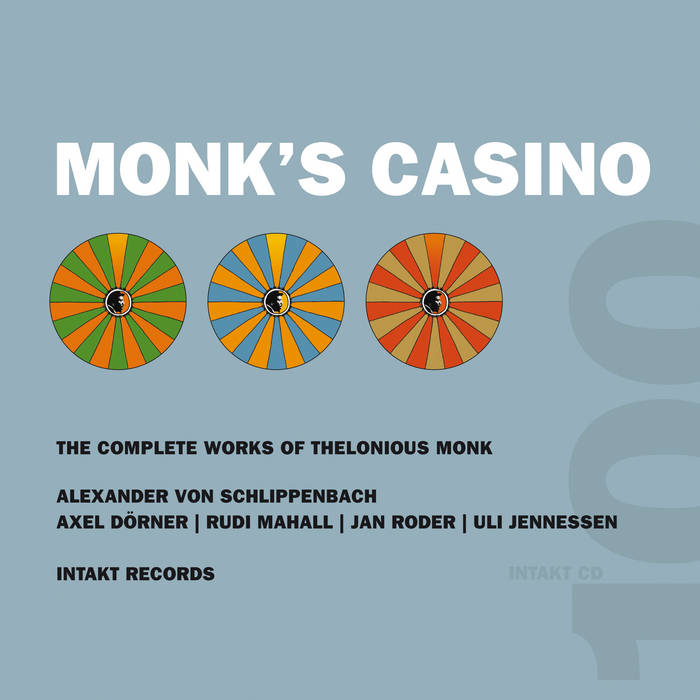 Very usefull collection of pieces for a jazz afficionados like I am. It's also a collection of excellents performances. I really like the live experience.

Here is the first ever complete Monk oeuvre project, undertaken by pianist and composer Alexander Schlippenbach, himself no stranger to Monk's songbook. The oeuvre challenge was, to create arrangements of all Monk's compositions – sometimes elaborate and lengthy ones, sometimes quick and simple ones – that would allow a listener to experience the entirety of Monk's compositional accomplishment in a relatively singular timespan. But at the same time to refrain from becoming overly puristic or precious about it, not treating it as some museal mausoleum for the entombment and enshrinement of Monk's dead music, but retaining the liveness and the essentially subversive spark that makes Mr. Monk so beautiful.
JOHN CORBETT, LINER NOTES

Monk's Casino is not an encyclopedic project, but an arrangement of the complete works of Thelonious Monk for live performance in one evening. At Monk's Casino, things often happen fast and sometimes get quite turbulent, too. Still, everything is well organized and, to that degree at least, under control. So here we go!
ALEXANDER VON SCHLIPPENBACH

One of this year's most enthralling recordings is Alexander von Schlippenbach's Monk's Casino: The Complete Works of Thelonious Monk (Intakt), a three-disc quintet rendering of 70 pieces, many in medley form, some for a theme chorus, others as spurs to improvisation. Credit Schlippenbach for being the first, and hope he won't be the last—the complete Monk ought to stimulate the ambitions of musicians as often as the complete Beethoven sonatas.


He's hardly under-exposed, but apart from a few devoted Monastics like the late Steve Lacy and Roswell Rudd, how many musicians have made a serious and in-depth study of Thelonious Monk? And, for that matter, for all the gazillion times you've heard "Straight, No Chaser" or "Round About Midnight", how many times have "Gallop's Gallop", "Consecutive Seconds", "Humph", "Functional" or "Who Knows" turned up on a set list? Alexander Von Schlippenbach is best known as the leader and mage of The Globe Unity Orchestra, a stalwart of the European free scene. Anyone listening attentively down the years would have recognised a lot of Monk in the mix, sometimes merely borrowed phrases, but just as often unannounced tunes and medleys that always suggested the German had studied the Monk canon with special care. His aim with this project was to make available the whole opus over two or three club nights, or in a single evening, as went down on one remarkable occasion at the 2002 Berlin JazzFest. The music's been done again since then and these recordings date from June 2003 and February 2004.
To clinch the rhetorical question above, it might be worth breaking off here, jotting down all the Monk titles you know, and scoring the result like those time-wasting word games in the paper: 30 = novice, 40 = oblate; 50 = acolyte; 60+ = abbot. Anything more than 70 and you'd have to be Thelonious Monk. That's the number Schlippenbach has arranged, sometimes as full-out improvisation grooves like "Bemsha Swing" on volume one or "Hornin' In" on the second disc, but just as often in miniature form, like the 44 seconds of "Stuffy Turkey" on the first disc, and just shy of a minute's worth of "Ruby, My Dear" on the second. As this suggests, the pianist isn't driven by consensus tastes, but nor does he seem to be airing unfamiliar tunes just because they're arcane, as some have been doing recently. "Boo Boo's Birthday", once championed by Kenny Drew Jr and almost no one else, has become a bit of a cliche "surprise choice".
One can imagine Schlippenbach tackling the whole thing on his own, but the group is integral to the success of the project. Axel Dörner's trumpet sounds completely idiomatic, even though Monk always seemed to favour saxophone players. Rudi Mahall's bass clarinet adds richness of texture and some unexpected sonorities. Jan Roder and Uli Jennesen complete the line-up. It must have been tempting to drop in some gimmicks in case interest flagged. There were reports of a large rubber ball being used for cueing in at one of the gigs but apart from that, and from Schlippenbach and Dbrner swapping instruments on "Japanese Folk Song", "Children's Song" and "Blue Monk", and Aki Takase guesting on toy piano on "A Merrier Christmas", it's done pretty straight and stands up more than fairly.
It's worth investing the time to sit down and listen to these straight through. Monk's dissonance isn't frightening any more, but because it's lost its shock impact, we've tended to forget or to overlook just how alienating a wallop some of these tunes still pack. What's important about this set is that it restores the idea of Monk as a great jazz composer, not just as an eccentric performer who hived off weird solo ideas and sold them as tunes. The wheel has come round again for Thelonious.
By Brian Morton, The Wire, London, Mai 2005

5 Stars
As Bach arrived at his own defining statement of harmony and form in his "Well Tempered Clavier," so can it be said forSchlippenbach and his group in this three CD-collection, one that could have easily been titled "The Well-Tempered Monk". In a little over three hours, these men have undertaken the challenge of arranging and performing the complex and varied pieces of Thelonious Monk in toto. This musical tourde force is not just another Monk tribute but a defining moment itself since it's the first time all 72 of the Maestro's works have been released in one complete package. The goal of this project, according to Herr Schlippenbach, was not to be simply encyclopaedic but to re-work the music and have it fit into a single performance. Presented in 2002 at a marathon concert at the Berlin Jazz Festival, the performance captured here also occurred live in that same city, but on two separate occasions, in June 2003 and in February 2004.
When listening to the entire work, we learn a few things about Monk himself, the performer's musicianship and the jazz continuum. It is important to note that Monk, probably more than any other composer, is cited as a source of inspiration for many a free jazz player, Schlippenbach being decidedly one. The angularity of the melodic motifs, the unconventional harmonic logic, and the subtly but cleverly displaced rhythmic patterns are all attractive features of Monk's style, not to mention his typical emotional depth and playfulness. All these facets are captured in the inventive arrangements executed by the leader on piano, Axel Dörner on trumpet, Rudi Mahall on bass clarinet, Jan Roder on bass, and Uli Jennessen on drums. The trumpet, for one, usually takes the load with the bass clarinet serving as harmonic outliner, melodic counterpoint, or rhythmic accentuator. The piano is percussive, yet richly voiced, showcasing melodic figures here and there while the bass and drums mark time and add colour to the proceedings. For the most part, tunes are presented singly only being combined in diptychs and triptychs on occasion. The segues require some quick and agile thinking from the musicians given that Monks pieces are quite different from one another in spite of belonging to a unified and coherent artistic vision.
Not everyone would approach these pieces as they are performed here (these are arrangements, after all), but the group plays in the spirit of Monk's best combos. Coming from a European free jazz matrix, Schlippenbach and his group don't rely on the clichés to which North American players often fall prey. It's quite refreshing to hear how an approach based on more "neutral," nonidiomatic training enables the performance of this music to soar beyond mere stylistic imitation, as each tune has the imprint of this group's "style," such as in the polyrhythmic interplay of "Monk's Point," the rattling cowbell breaks of "Misterioso," or the lyrical solo rendition of "Eronel," where the silences are an integral part of the music.
Paul Serralheiro, The Music Scene, Sommer 2005, Canada


Does the world need yet another glorifying and adulatory Monk project? The answer to that interrogative is as subjective as any other aesthetic question. But when the results convey as much clever creativity and unflagging brio as this industrious Intakt offering the inclination to argue against the enterprise withers easily in the mind.
Derek Taylor, All About Jazz, USA, Mai 2005

Bandcamp Daily  your guide to the world of Bandcamp